It is not commonly known that after the collapse of the co-operative Ruskin Mills in 1899 and its surrender to Heaps some members regrouped into another co-op incorporated in Ruskin in 1899 under the name The Industrial Union; one that focussed on agriculture. The charter members of The Industrial Union were: Selby-Hele + wife), Kinraide, Morrow, Charlton, Haycock, (Ms) Donnelly, Boissevain + wife. They tried to establish a permanent farm on the Fraser in the Boundary Bay area but could not get the land they wanted at an acceptable price. It seems that the co-op then moved its operation to Vancouver Island. Under Turgoose the 1900-1901 Henderson Directory listed the Industrial Union (Selby-Hele president, Kinraide vice-president, Charlton secretary) as well as the names of Boisevain, Kinraide and Morrow (these three perhaps doing farm work). Also listed at Turgoose was Charles Whetham (JP). Whetham’s close association with the co-op movement in Ruskin is well-known but his presence in Turgoose is a surprise. Further information wanted.
Posted by fb at 8:18 PM No comments:

We know that the old Whonnock general store burned down in March 1916 when Mr. Methot was the store keeper. Click here to refresh your memory. I always wondered if Methot had purchased or leased the store from Whiting. A few days ago I came across a little note in the Coquitlam Star of 8 August 1914 under the heading "Whonnock Failure"


Mr. R.S. Whiting, a leading merchant and storekeeper of Whonnock, last week made an assignment of his business for the benefit of his creditors. The Westminster Trust Company are the assignees.

Mr. Methot, it appears, was also the owner of the store and Postmaster Whiting would have moved the post office from the store to its present site a year before the fire and not after the fire.
Posted by fb at 11:03 AM No comments:

The second home of the Godwins 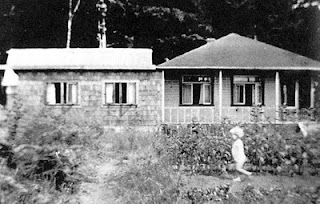 Recently Paul Godwin, son of Eric Godwin seen running on this picture, visited Whonnock to see where his dad made his first steps and where his grandparents, George Godwin and Dorothy Purdon had lived. George Godwin was the author of the book The Eternal Forest despised by the Whonnock residents. Click here to read the Whonnock Notes discussing the book.

The old-timers knew that the Godwins lived on 268th Street where today the Carlsons have their home but not that they later moved to another place in Whonnock. The assessment records tell us that they only paid the taxes on that property on 1913 and 1914 but not before 1916 did they return to England--George to fight in France. Where did they live between 1914 and their departure in 1916? Paul’s visit made me look again at the assessment records and I discovered that they moved to 9352 Spilsbury Street. That is where the house on the photograph stood and where that young Eric was running. Eric and the house are now gone but there is still a Douglas fir growth behind the new house. It certainly was a more convenient place—a larger house and close to the railroad station and an easier walk to the general store and the post office.
Posted by fb at 12:43 PM 1 comment: