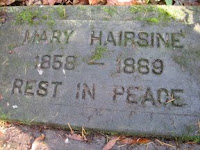 Who built the Byrnes houses?

After the "Looking Back" column, Whonnock's Aunt Hill appeared in The News, 8 August 2007, I received a call from Margaret Matson (née Leaf) telling me that not Winnifred Gordon, but a Miss Rogers built the two Byrnes houses for herself and her sister, a Mrs. Davies. Miss Rogers must have sold the houses to Mrs Gordon since Byrneses acquired them from her and not from Miss Rogers.
Posted by fb at 12:37 PM No comments:

There are four Brodie graves at the Whonnock Cemetery—only John Brodie’s has a grave marker. The others seem empty. Inscription on grave marker: BRODIE / In loving memory of / JOHN BRODIE /1825 - 1938 / Born Beith Scotland.

Descendants in the UK have following obit (publication source unknown):

The nephews are children of John Brodie's two brothers:

James H. Brodie A Mrs. Jas. H. Brodie or Mrs. James Brodie, sister-in-law of John Brodie, appears in the communion role of the United Church in Whonnock in 1929 and she is recorded by the church as moving away on 4 May 1939, almost a year after John Brodie’s death.

John (from Whonnock) seems also to have had two sisters, who are buried with their parents in Paris, Ontario.

The Dangers of Dave's World

I discovered on the Internet that in 2000, Jay S. Jones, submitted a thesis with the title The Cleansing Time at Simon Fraser University, for his MA degree. The thesis is available in pdf format on the Internet. Click here to read or download the 118 pages.
Posted by fb at 3:49 PM 1 comment:

Where did Simon Fraser and his companions sleep in the night of 1 July 1808? Fraser refers to a "native village" and a good number of inhabitants. The records don't give definitive information where that village could have been but it is placed somewhere between Mission and Barnston Island.

A few years ago, Nick Doe, using Simon Fraser's latitudes and tidal observations, established convincingly that the "native village" would be at Hammond or very close by. Perhaps on the south shore, but definitely not furher up the river. (BC Historical News, Vol. 33 No. 2, Spring 2000 and personal communications).

Archaelogical evidence has shown that there was once an extensive village site at Hammmond.

Supporting evidence to Doe's claim is the fact that the villages from Hatzic to Port Haney had been depopulated by the smallpox epidemic of 1782. No large settlements could be expected on that stretch of river.

The two neighbouring Byrnes homes, west of the post office, were constructed for Winnifred as speculative rental houses in 1931 and 1932 by contractors Ralph Daniels and Dick Whiting. These buildings are now part of Whonnock’s heritage.

Margeret Matson(nee Leaf) suggests that it was not Winnifred Gordon, but a Miss Rogers who built the two houses for herself and her sister, Mrs. Davies, with three boys and a girl. Mrs. Gordon must have bought the houses from Miss Rogers since the Byrneses purchased the house(s) from her.
Posted by fb at 8:21 PM No comments:

Evelyn, who lies burried in Whonnock,was the daughter of Emily Maude and Albert Shields.

Arthur Wedge married Isobel Hastings Kirby on 30 July 1930 at Edmonds BC
Burnaby) She died on 3 January 1961 in Maple Ridge at the age of 67.

Whonnock and the Kwantlen

Avove the Katzie were several villages that, according to Simon, were wiped our or nearly so, by smallpox before Fort Langley was founded. [Listed sites at Derby, Whonnock, Ruskin, and at Hatzic.] On the south bank between the last two were the Matsqui, who survived the epidemic.

Simon referred to the "Derby people" as a "separate tribe" who owned the Salmon River on the south side of the river and possibly Kanada Creek on the north side. He referred to the Nicomekl River, from which the Indians and early traders portaged to the Salmon River, as ... the "river of the Semiahmoo. However, a Semiahmoo informant at Lummi said the original inhabitants of Mud Bay, where the Nicomekl has its mouth were a tribe called [Snokomish] and that their river was called [Snokomish, now become Nicomekl. The [Snokimish] were wiped out by the smallpox before the whites came, whereupon the Semiahmoo, who had intermarried with them, extended their territory northward to include that of the former [Snokomish] around Mud Bay.

In view of these two accounts it seems likely that the Derby people, who we might call "Sokomish," occupied both a segment on the Fraser and a bit of saltwater shore-line at Mud Bay, together with the two streams that make canoe navigation from one
place to the other possible with only one short portage. After the Snokomish were wiped out, the Semiamoo took over the salt-water section of their territory so that what the Semiahmoo considered the "Snokomish" river came to be the "Semiahmoo" river for the people of the Fraser.

According to Simon, after the Hudson's Bay Company established Fort Langley the Kwantlen moved up-stream to be near to the fort and established themselves on McMillan Island. For this reason they became called the "Langley tribe." After this move they took over the territory of the other villages wiped out by smallpox mentioned above.