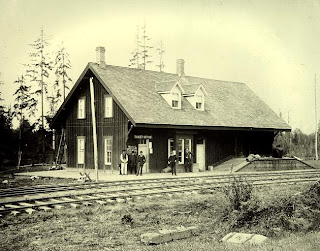 The photo shows a standard station house at an unknown location somewhere on the north-shore of the Fraser between Port Moody and Hope. The first station buildings at Hammond and Whonnock looked just like this one. Stations were built at “at points about equidistant from each other,” a distance of about ten miles. A 1884 time card shows the distances between the stations: Port Moody 0, Port Hammond 12, Wharnock 20, Mission 30, Nicomen 40, Harrison River 49, etc. In the initial stage of the construction of the railroad Onderdonk gratefully used the existing private wharfs at Port Haney, but he made clear that he did not intend to build a station there. It would not have fitted in the scheme. Photo source
Posted by fb at 12:11 PM No comments:

Plan included street names some of which have been identified:

Chigweel Street (should have been Chigwell Street) Edward Mohun was born in Chigwell, England Chigwell is a civil parish in the Epping Forest district of Essex. It is located 11.6 miles (18.7 km) north east of Charing Cross in London and near the boundary with the London Borough of Redbridge. It is served by a London Underground station and has a London (020) area code.

Stenton Street William Hammond was born in Fen Stanton.Fen Stanton lies on the Cambridge border of the old county of Huntingdonshire, on the south side of the River Ouse

Waugh Street Emmeline was the only child of HBC Chief Trader John Tod and Eliza Waugh.

Bromley Street Emmeline Mohun's first husband was William Henry, who died in 1878. Newton took charge of Fort Langley a few month after they married in September 1856. Newton was a native of Bromley, Kent.

Lorne Road This is the only "road." It is named after he Marquess of Lorne, governor general of Canada,married to Princess Louise, daughter of Queen Victoria. The vice-regal couple visited British Columbia in 1882, when the plan for Hammond was drawn up.

Princess Avenue This only "avenue" and it honours Princess Louise.
Posted by fb at 9:02 PM No comments: