I have been doing a wee bit more research on John [Stuart Black]and his family.
I managed to track down John's mother Ellen and brothers Francis and Herbert. Ellen died in Bonar Bridge, Scotland in 1898. His brothers both became Headmasters. Francis was Head Master in a school in the Highlands and Herbert was a headmaster in a school in Sunderland, Co.Durham, England.
John and Catherine were married in Brussels, Ontario in 1895 and Charles was also born there. The three other children were born in North Dakota, USA. From the 1910 USA census the family were living in Langdon, Ward 1, Cavalier, North Dakota. Farris was born there in June of that year. John's occupation on the census is Fur Trader.
The family must have moved from North Dakota to Whonnock later in that year.
Catherine died in San Diego, California in 1959.
I found that Helen moved to the USA in 1931 with her husband Merton Rose. They had two daughters. Helen died 2006 in San Diego.
Charles died in 1991 in British Columbia. He and his wife Mildred had a son Hugh Donald Black in 1927. Unfortunately Hugh died in 1937 in Vancouver.
Jean married Roscoe Eustis and she passed away in 1988 in British Columbia.
Posted by fb at 8:04 PM No comments: 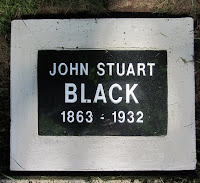 Thank you very much for sending the photograph of the grave marker of
John Stuart Black.


From the family research that I have done I found
that John was a first cousin of my great Grandfather. John's father
Alexander Stuart Black was a brother of my Great, great grandmother
Mary Stuart Black. There were 12 children in total. They were born in
the family croft of Clachaig, Nethy Bridge, Scotland. Right in the
shadows of the Cairngorm Mountains in the Highlands of Scotland. I have
found Stuart Black's farming at Clachaig since 1700 and it is still
farmed by Donald Stuart Black today.

Alexander became a Bank Clerk and moved further north to Bonar Bridge,
in the county of Sutherland. He married Ellen Russell in 1862 in
Inverness. Ellen was born in Australia and was living in Gosport,
Hampshire, England before her marriage to Alexander.

Alexander Stuart Black died in 1889 and the remaining family seem to
have left Scotland as I have been unable to find any further records of
them in Scotland or the rest of the UK. Not sure if they all went to
Canada, but John Stuart Black emmigrated to Canada in 1889 (documented
on 1911 census). He married Catherine Augusta Cormack in Brussels,
Huron, Ontario on 9th November 1896.