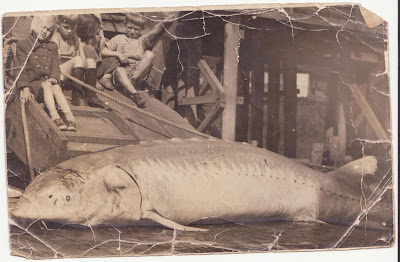 From Robin Nadin this snapshot: "A picture of a sturgeon caught by Hank Lee off Crescent Island in May 1943. It was 800 lb. and had 100 lb. of caviar The blond girl is Shirley Lee, Ted's daughter and Robin Nadin and the boy is Wally Swinden"
Robin's parents, Edward Albert (Ted) Nadin and Kathleen, née Sprott, owned the Whonnock General Store ("Grahams" across Showler's Red and White) from 1936 to 1957 when they sold the store and moved to Canim Lake in the Cariboo where their two sons, Peter and Robin, still live.
Mary Sprott, a sister of Mrs. Nadin, was married to Frank Daniels.
Posted by fb at 12:34 PM No comments: