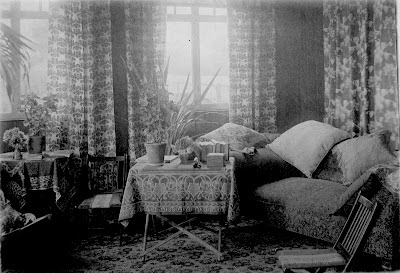 Going through the photographs Jim Spilsbury entrusted to the UBC Rare Books and Special Collections I found this image of the interior of "Skyacres," the 1909 Boulanger home.
Posted by fb at 7:54 PM No comments: 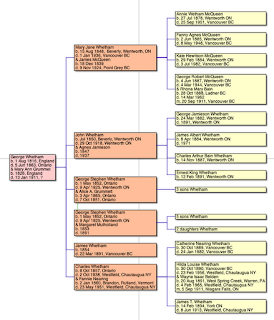 I added a group "Work in progress" to the Whonnock & Ruskin History Web site. The following documents are in the new group.

Thanks to Val Patenaude (Maple Ridge Museum and Archives) who contributed this newspaper cutting from the The Gazette of 17 January 1963. Today Charles Miller  is remembered most as Ruskin's historian. He published two books: The Golden Mountains in 1973 and the Valley of the Stave in 1981 (Hancock House). The Golden Mountains is still much thought after by treasure hunters and many (most) of the mines have been rediscovered. The Valley of the Stave is equally valuable for those interested in regional history.
Posted by fb at 12:17 PM No comments:

Church and Cemetery on Whonnock IR 1

A recent “Ancestry” information exchange showed some confusion about Whonnock's First Nations cemetery and the church that stood on the Whonnock reserve.


Valerie: “There is a small "First Nations” graveyard on the side of the highway at a place just East of Maple Ridge called Whonnock”

Roree: “.... this is indeed the Whonnock area. My cousins and I are descended from these people and this church and this graveyard contain some of the older records that are difficult for us to find since it requires some travel....One of my cousins a very astute genealogist found this church and the graveyard some years ago, but sadly had run out of time to record any of the information from the church or the graveyard.”

There are two First Nations cemeteries in this eastern part of Maple Ridge. The one Valerie Walton mentions is on the south side of Lougheed Highway and on Langley Indian Reserve No. 5. The other one is on Whonnock Indian Reserve No. 1 and that is the one Roree refers to. There are no plans of either cemetery.

There was a Roman Catholic Church on Whonnock IR 1 built by the Oblates of Mary Immaculate (OMI) around 1860 (?). It was demolish more than half a century ago. It is unlikely that there were any records kept at that church. The OMI fathers at Mission kept the records of baptism, marriage and death of all in their care in the area, including the Whonnock IR. Those researching First Nations/Kanaka roots are familiar with those records.


The little First Nations cemetery on Whonnock Reserve No. 1 is just east of the municipal Whonnock cemetery. In 1997, when I recorded the grave markers, I found a few iron so-called “OMI” crosses. They had been removed from the graves where they stood originally and are now no longer at the cemetery. These crosses were marked “Cathrine Feb 1888,” “Patrick Feb 1889,” Alick Mar 1892.”
There are remnants of some wooden crosses without any wording left.
The only surviving markers were the following:
Reference: Whonnock Notes No. 2 – Cemeteries in Whonnock
Posted by fb at 8:25 PM No comments:

This entry has now been moved to the Whonnock & Ruskin History Web site. Click here to read it.
Posted by fb at 8:47 PM No comments:

This entry has now been moved to the Whonnock & Ruskin History Web site. It is part of a larger text about the residents of Whonnock IR 1. Click here to read it.
Posted by fb at 7:17 PM No comments:

This entry has now been moved to the Whonnock & Ruskin History Web site. It is part of a larger text about the residents of Whonnock IR 1. Click here to read it.
Posted by fb at 7:14 PM No comments: