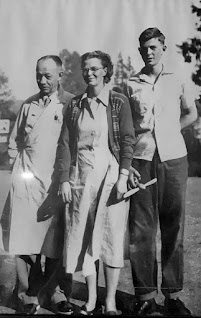 Ted and Rusty Ming and their son Wayne.

Whonnock Lake is not as Wikipedia says, a man-made lake.
It is a natural muskeg lake and, if left alone, it will slowly turn into a peat marsh.The only regular water input is from the north. There is an exit to Whonnock Creek on the south-east side originally closed off by a sandbar (beaver dam) that was replaced in 2008 by a man-made berm and fish channel. This is where the water escapes from the lake to Whonnock Creek.
In the past beavers regulated the water level of the lake — now the city does that.
Posted by fb at 3:27 PM No comments:

About the property on the south side of 96th Avenue between 272nd Street and the cemetery.

The original house was probably built ca. 1920 by carpenter Alexander Thomson MacBryer (or McBryer) for himself, his wife Helen and three sons Alexander Ainslie, George and William.

Alexander Sr., was born in Scotland and migrated in 1910 to Manitoba with his first wife Catherine and their newborn son Alexander Jr.  Catherine died in 1911.

In 1912 Alex Sr. married Helen. In November 1914 Alex Sr. joined the Canadian Expeditionary Force. The family then lived in Vancouver where son George was born in 1915. Not certain when and where William was born.

After the Fist World War ended the family moved to Whonnock where they lived until 1958 when the couple and son William moved to a place near Gibson. By that time Alexander Jr, and George had moved away. AT drowned near Gibson in 1961. Helen died in 1964 in Vancouver, George died in a plane crash near Alert Bay in 1966. Alex Jr. in Maple Ridge in 1989. William also rests at the Maple Ridge cemetery.

Plan to wreck a train