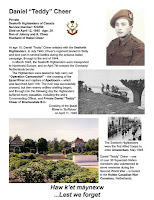 Private Daniel Cheer from Brackendale was killed in action during the last days of the liberation of Holland in 1945. The image to the right shows a poster displayed in Brackendale on Remembrance Day. Click on the image to enlarge.

Was this Cheer related to the "Stave River" Cheers? Would anyone related to him still be living in the Brackendale and Squamish area today? Click here to find copies of records assembled to find answers to those questions.
The findings: Daniel's father was John Daniel  Cheer from Whonnock who died in 1929. Private Cheer was probably born there as well. Private Cheer had one maternal half-brother, Moses Antone and two maternal half-sisters Margaret Lewis (née Antone) and Marjorie Cordecedo  (née Miranda). Private Cheer's widow, Mabel Andrew(s), married Andrew Lewis, a son of Margaret Lewis. The most surprising discovery was that Private Cheer's only full brother, Alex August Cheer still lives in Squamish under the name Alex Williams. His photo shown here is from a video shown in the weekly newspaper The Chief from Squamish (courtesy Eric Andersen). Click here to read the article about him in The Chief and to look at the video. 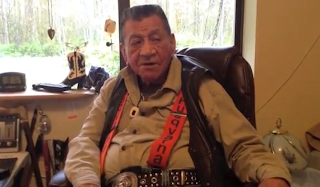 From "The Founding of Quatsino Colony" by Kenneth O. Bjork in Norwegian-American Studies Vol 25 Page 80


But farming, blended with fishing, logging, and even sailing, was the more normal activity in British Columbia, as elsewhere on the Pacific slope. Wharnock on the Fraser River experienced new life in 1897, when a number of Norwegians normally bought 30 acres of land each and set to work at once clearing it. One writer described the enormous spruce and cedar trees, the hemlock, birch, and other stands of timber found in the area. When one sought to clear enough trees to support a cow and a hen, he said, one wished he had claws like a bear and the strength of a Samson. "Farming here," he added, "is still in its childhood; a number have cleared a few acres; some have done almost nothing." All who lived at Wharnock engaged in salmon fishing in the summer. He concluded that there were altogether too many bachelors in the area going about in groups of ten to twenty and living two and three to a cabin in the settlement. {20}
Eleven canneries were planned for the Fraser River in 1897, and the "Lee boys" of Wharnock bought shares in the most northerly one, paying for them by bringing piling and lumber for building and operating the cannery. The people in the settlement were from Trøndelag in Norway, and they were getting along well by 1899 but were still cutting down giant trees. One writer thought salmon fishing on the Fraser the most important occupation, but conceded that the soil was very fertile. He thought that, with a little capital, one could do quite well at farming. It was hard going with no money, but there was no evidence of real need or suffering among the settlers. Good land for sale at reasonable prices was available, some of it partially worked up and owned by people of British origin. Wharnock was visited by three steamers daily, and one could travel to New Westminster, 21 miles distant, and back [103] the same day at a cost of $1.00 for the round trip. Trains of the Canadian Pacific Railway also ran nearby. {21}

So far I've only been able to get more than an unreadable copy from a microfilm of the Skandinaven of February, 1897.
Posted by fb at 2:09 PM No comments:

Little information but I put a chart together and hope it will help find out who is who when visiting the Whonnock cemetery. Click on the image to enlarge. 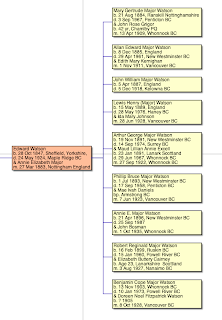