Without much ado Council Minute books from 1874 up to and including 1930 have been made available in digital format on Maple Ridge’s Web site. Click here for the links.
Note that the minutes from 1892 to 1909 are absent.
Posted by fb at 9:02 PM No comments:

From The Outpost May 1975. Click on image to enlarge. 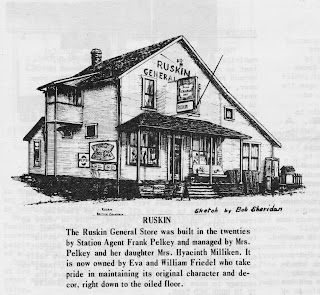 Arthur and Mabel Coldrick called their house on 104th Avenue “Wilmington” after the place where they had lived together in England. They had spent many years the Yukon before settling in Whonnock in the mid-1920s. Their quiet life escaped the attention of their contemporaries in Whonnock and information about these two kind people is scanty to say the least.
We know that Arthur Coldrick joined the Whonnock Detachment of the Pacific Coast Rangers and he is on the photo of the members taken at Silverdale. The late Brian Byrnes said of him that he was a “very nice old boy, deeply interested in local history.”


Both Arthur and Mabel are buried in the Whonnock Cemetery. He died in 1952 and she three years later. Their graves are as forgotten as their lives.
Attached is a draft note about the Coldricks. If you have anything to add please send an e-mail to webmaster@whonnock.ca
Posted by fb at 8:19 PM No comments: 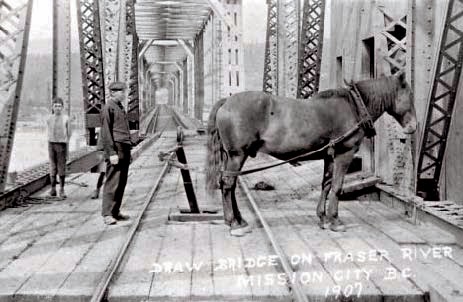 The photograph shows a horse tied to a lever on the Mission bridge in 1907. Allegedly the horse was used to open and close the bridge as for instance described as follows:


The swing span opened and closed by horsepower, and the horse's name was "Charlie." The animal was harnessed to the mechanism in the centre of the swing span and walked around in circles, opening or closing the bridge as required. Charlie was stabled in a shed attached to the side of the swing span in winter and in a field on the south bank of the river in summer. Whenever a sternwheeler whistled, Charlie went to work.


This quote is from Postcards from the Past: Edwardian Images of Greater Vancouver etc. The authors did not show this picture. It is evident that there was no space for a horse to walk around in circles. The story is repeated by other authors but, frankly, I think it was a well-staged hoax.

The other day I was asked to find out where a man called Henry Foster had farmed in Whonnock.
His name appeared on the 1921 Canada Census as living in Haney. He is then 65 years of age.
His wife, Margaret, died in 1932 in Haney. Why would Henry and his two unmarried daughters, after Margaret’s death have moved to Whonnock? He was by now an aged man. Did he move at all?
His name did not appear in the directories as a Whonnock resident in the years following Margaret's death. But then, as from 1939, his name started showing up as a Whonnock resident in the directories.

The answer was that in 1938 rural postal delivery started from the Whonnock post office. The first rural route stretched all the way to where the Fosters lived at the north end of 234 Street in Albion. They had never moved to Whonnock.
Before home delivery the Fosters would have picked up their mail somewhere else, but after 1938  their address became part of the mail was from Whonnock and their postal address was Whonnock. That was the reason their name was included as a resident of Whonnock in the directories.

A brief summary of the owners and uses of the "Luno" buildings on Lougheed Highway. Still looking for pictures of "Jean's Cafe" or the "Hoofbeat Coral.
Corrections or additions are always welcome
Posted by fb at 9:46 PM No comments:

Whonnock Notes No. 21, “George Stanley Godwin, 1889 – 1974, Biographical Notes” is now available on this Web site, ready to download or read.  Click here.
For printed copies at $5.00 talk to Sue or Teresa at the post office. Printed copies of all 20 earlier issues are still for sale.
The publication immediately caught the attention of BC BookLook, the Internet companion to BC BookWorld. Click here to read their comments.


Click here for Wikipedia.
Posted by fb at 11:18 AM No comments:

There goes the neighbourhood! 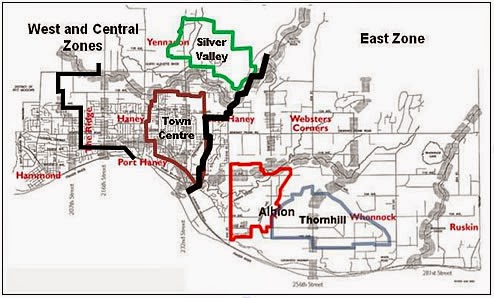 This map is part of a recent “Facilities Review” by School District 42 showing the strongest potential growth areas (new developments) in Maple Ridge.
As shown on this map newly created "communities” overlap and and ignore the historical communities of Maple Ridge shown in grey on this map: (Port) Hammond, (Port) Haney, Maple Ridge (The Ridge), Yennadon, Webster’s Corners Albion, Whonnock and Ruskin.
There are more “new communities” overlapping historical communities that are not shown here: Allouette Valley, Cottonwood, South Bonson, and South Meadows.
Posted by fb at 8:16 AM No comments: