Riding down to Haney
We ride the Whonnock “Flier,”
No running boards, no headlights,
No motor and no tires;
No motor and no spark
Still less co-operation.
The bus won’t use good gas and oil
It runs on reputation.
We have to ride this relic
Five days in every week.
We can have a seat but prefer to stand,
It’s safer so to speak.
The seats of lath and slivers,
Are frightful to behold;
The chick-wire windows let in drafts
And boy! It’s really cold.
Long may its rust spots glitter
Long may its motor cease
Long may it run the “Junk Heap Trail”
Then forever rest in peace.

It is generally believed that in 1904 Billy Miner robbed the CPR train at Silverdale and that this happened right in front of the Donatelli house at the end of today’s Donatelli Avenue. According to one story, Mrs. Donatelli  pushed the children away from the windows because she saw that the men had guns. A more exotic version tells us that she pushed the children to the floor when shots rang out.

A newly discovered interview with Nat Scott, the train engineer of the ill-fated train, contradicts that story. Since the engineer was right there when it happened and the interview was held immediately after the train arrived in Vancouver that night the article must surely be given more credence that any other accounts of the incident. The engineer was told to stop the train first at a place out of sight of the Donatelli home, There they left the passenger cars. Then the train moved on to Ruskin where the actual robbery took place.

Click here to read a transcript of the article about the interview published in Daily Colonist of 13 September 1904.

Click here for the story as published on The Ormsby Review.

Below is a copy of a map shown in the book Interred with Their Bones, Bill Miner in Canada, by the late Peter Grauer, self-published in 2006. (1) Silver Creek, shown on the map as the place where the passenger coaches were left, is actually named Jamieson Creek. The bridge across Jamieson Creek would have been where today McLean Street crosses the rail tracks. Silver Creek was the original name of today’s Silverdale Creek close to Mission and far from Silverdale. (2) The actual looting took place near Heaps mill in Ruskin. (3) From Ruskin, without any wagons attached, the engine sped away to Whonnock. Bill Miner and his friends were dropped off at “the creek just this side of Whonnock siding.” That was at Cook Creek, right at the Whonnock wharf. There they “borrowed” a rowboat to cross the Fraser and vanished in the night. 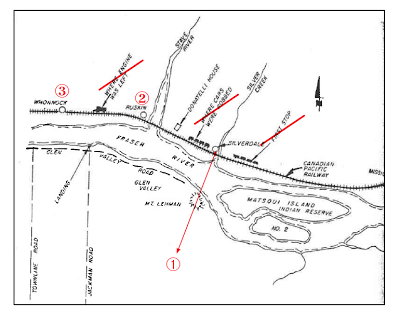